Saga. We had a couple of Saga games - Alan vs Rob, and Greg vs Steve.

Kings of War. Alan (Brotherhood) played two games with Philip (Empire of Dust), with one win each.

The club's A.G.M. was held a little later this year because of the move to the new venue. Fees remain at $60 for the year. In this year's committee Kit is the treasurer, Kendall is the secretary, and Philip is the president. We agreed to run three tournaments - Kings of Shore (KOW), Flames of War, and Push of Pike (DBR).

Kings of War. Alan had two games using his Goblin army, first against Rob's Dwarfs and then against Steve's Varangur.

This year's national convention was hosted by the Hamilton Immortals. Attendance was around 100, and from our club there were 7 of us in the Napoleonics tournament, won by Andrew. Lee played in Flames of War and Rob was in the Bolt Action competition. Everyone who attended got one of the well thought out goodie bags containing dice, a pen and superglue!

With NatCon coming up over Easter, we had several practice games of FOG Napoleonics:
Andrew (French cavalry corps 1814) played Al (British in France 1814), with a mutual break.
Brett (Austrians 1809) played Mike (French 1814), also a mutual break.
Stu (Mamlukes) played Philip (Netherlands 1815), this time a decisive victory to the Egyptians!
As well as the Napoleonics game, there were also a couple of Flames of War games between Kit and Steve - Russians v Germans. 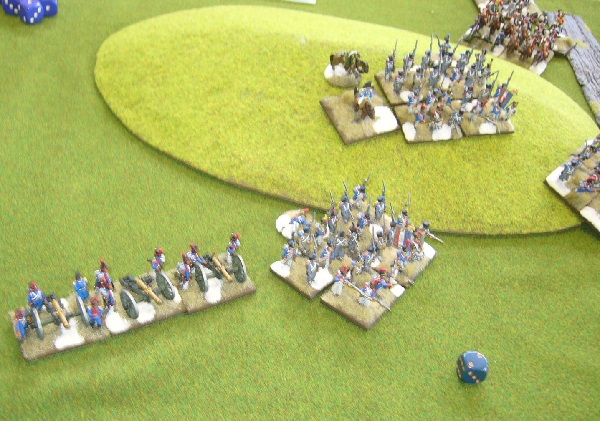 The French grand battery and infantry defending a hill contemplate the appearance of a big blue dice ahead of them.

The NSWC has moved to a new venue: Mairangi Bay Scout Hall, 20 Hastings Road, Mairangi Bay.
Thanks to everyone who helped out with the moving. Our normal meeting schedule is now running at the new hall.

The Scout hall that we used isn't now available, so there won't be any club meetings until we move to our new venue. We'll announce the new venue as soon as details are confirmed.

Congratulations to Mike for winning first place in FOG-N at CanCon over in Canberra. There were six NZers out of the 12 in the tournament, and Mike's Ottoman Turkish army was the clear winner.

Alan and Rob had a game of Frostgrave. Otherwise it was all FOG-N at the club today: Brett (Austrians) vs Andrew (British), Philip (British) vs Stu (Mamluke), Al (British) vs Kendall (Württembergers)