27 December 2004. The first semi-final was won by Brett, using an Alexandrian Imperial army, against Philip with New Kingdom Egyptians. Brett goes on to play the winner of the other semi-final game between Andrew and Paul.

Warhammer Fantasy Battle - There were a couple of WHFB games, followed by some Warhammer Quest roleplaying. In one of the battles, Dan the Vampire Count won with a slim margin over Rob the Chaos Mortal.
DBR 15mm - Philip's Algerians and Jono's Parliamentarians fought to a draw, with both armies breaking. To avoid shipwreck the Algerian galleys beached themselves. The marines then landed only to be shot to pieces by the English dragoons. It's a tough life in the navy.
Shattered Lances - Brendan and Philip had another test game. The Ghaznavid general perched on top of an elephant had a splendid view of his army disappearing in rout around him. The Turkomen general didn't have such a good view of his victorious army, having himself fled in rout...
The old favourite Space Crusade also appeared at the club.

The Christchurch Wargaming Club is hosting the national wargaming convention at Easter next year. They have some information about the convention on the Natcon website. There will be competitions in these periods:
Warhammer 40,000
Warhammer Fantasy
DBM 15mm
DBM 25mm
Flames of War
Lord of the Rings
Volley and Bayonet
Panzer Marsch!

Flames of War - Rob's Brits defeated Garth's Germans.
Flames of War - Kendall (Germans) and Kit (Indians) had a game (result unknown at this time)
Warhammer Fantasy Battle - Aaron's Elves took on Dan's Vampire Counts.
DBR 15mm - Nic and Brett played an English Civil War scenario, with a win to the Royalists.
DBM 25mm - Paul and Andrew had a competition rematch, this time Paul's Burgundians gaining a 10-0 victory over Andrew's Chinese.
Principles of War 15mm - Philip and Edwin had a game using 1859 Austrians and Piedmontese.
... and a couple of rounds of "Kill Dr Lucky" to wrap up the club meeting.

A day that started full of promise - the club was buzzing with activity. The hall was full of tables with all sorts of interesting games. Some of us were painting new figures, planning new armies, and trying new rules. After the first of the games had concluded a few keen chaps went to support the mighty North Harbour, while the rest of us had a TV set up at the club hall...
The wargames:
WWII Aerial - Andrew and Matthew had a dogfight, but with little credit to the pilots the British flew home after running out of ammunition.
Flames of War - Michael's Germans won a 4-3 victory over Kit's Russians in a 4000-point game. That's a lot of Russians on the table! Michael maintained his record of dive-bombing his own panzers three games in a row.
Flames of War - Rob's British took on Garth's Germans.
Flames of War - Grant (Germans) and Kendall (British) played a FoW game using 6mm figures, with quite a satisfactory game both from the visual aspect and in game play. After lots of armour was destroyed the win went to the British.
DBM 15mm - Jono's Lydian hoplites redeemed themselves, winning a resounding victory over Danny's crusaders.
Shattered Lances 15mm - Brendan ran a couple of scenarios using the latest draft of Shattered Lances, the first game against Brett,and then against Jono.
DBR 15mm - Our newest club member, Nic, played a renaissance game with Philip. Nic's Dutch defeated Philip's Maximilian Imperialists.
Rugby (full scale) - North Harbour almost won the game...

Quite an interesting meeting today, with our club's usual eclectic array of games. It was good to see a few There were a few more games in the club ancients competition which has been rather quiet recently.

Shattered Lances - Brendan and Kendall refought the battle of Ascalon 1099.
DBM 15mm - Brett's Carthaginians defeated Jono's Persians. Hannibal's warbands bowled over the Greek mercenary hoplites in the Persian army.
DBM 25mm - Philip (Kushite Egyptian) beat Al (the Spartan.) It was a particularly successful day for the Kushite archers. The battle was decided by a combat between the two C-in-Cs, only the Egyptians had a fast Light Horse sneaking around the flank...
DBM 25mm - Andrew (Han Chinese) beat John (Later Samurai)
DBR 15mm - Danny (German Catholics) beat Grant (Cossacks)
Flames of War - Garth's Germans took on vast numbers of Michael's Russians.
And no club meeting would be complete without those Damn Battleships Again! Andrew's new British fleet inflicted a defeat on Stu's Americans. The American admiral travelled in style on a yacht, but the rest of the fleet struggled against the more modern British battleships. Andrew deployed an innocent looking merchant ship... sowing a minefield behind it.

On the weekend of 4 & 5 September 2004 we hosted the first Push of Pike 15mm DBR Renaissance wargaming tournament. Congratulations to Danny who led his Imperialists in four straight wins to take out the trophy. Full details are on the Renaissance page.

Shattered Lances - A game between Brendan and Philip using Brendan's new Crusades era ruleset. A unit of chevaliers charged gallantly into a body of horse archers, but were soon routed leaving behind their dead general. The rest of the Ghaznavid army was manoeuvring to surround the confused crusaders.
DBR 15mm - Brendan's Early Danes took on John's German Minor States. A game of mutually assured destruction with both armies breaking.
DBR 15mm - Philip (Knights of St John) beat Jono (Parliamentarian). A good day for the fast blades!
Flames of War - A large game between the allies, Kendall (US Airborne) and Rob (British armour), and the Germans, Brett and Garth. A decisive win to the allies. Kendall: "Not such a silly game."
Warhammer Fantasy Battle - Dan the Undead took on an army of Elves.
Napoleonics 15mm - Two games between Gerard and Andrew. In the first one, using Principles of War rules, Gerard claimed a 'crushing victory' over Andrew's Italians. In the second game Andrew upgraded to an French army. Regrettably his results weren't upgraded. That game was played using a new set of rules being developed by Andrew and other Napoleonic players at the club.
Naval - Certainly the most stylish game of the day was an 1898 Spanish-American naval battle between Stu and El Andrew, using the Damn Battleships Again rules. The battle was a win to the Spanish, but they still have to explain how one of their ships collided with a stationary island. Both fleets were scratch built by Stu, as was the island.

DBMM 15mm - Two Alexandrian Imperial armies faced each other, commanded by Jono and Brett. Jono's larger mounted wing quickly overthrew Brett's cavalry, but Brett's four-deep pikes defeated Jono's three-deep formation giving him the victory. One of the Alexanders made a 'brilliant stroke' charging into some rough going, and was never seen again...
DBR 15mm - A historical match between Philip (Knights of St John) and Kelly (Ottoman Turks). The Knights had only two mounted elements, neither of which survived the game, but the firepower of their galleys, arquebusiers, and artillery in a fortified town gave them the victory over the invading Turks.
Rapid Fire 15mm - Kit and Kendall played a WWII scenario, the Groesbeek Heights, with the Germans counterattacking the American landing zones near Nijmegen. By the end of the day the American paratroopers were pinned down and surrounded. Kendall : "Stupid game!"

23 July 2004. Our intelligence agent in Newmarket reports that there is a new toy soldier shop called Urban Warfare (suppressed laughter). Historic Games now have competition. Who will survive?

WHFB - Dan's Vampire Counts got a minor victory over Rob's Beastmen.
DBR 15mm - Philip's Algerians defeated Danny's Eastern Frontier Imperialists. A lucky cannon shot knocked the German C-in-C off his horse, and then the Janissaries and Algerian warbands charged forward.
DBMM 25mm - Brett's Medieval Germans beat Kelly's French Ordinance. The German battle report has their cavalry turning a flank, the Swiss allies of the French advancing down the centre creating a gap through which the German knights attacked. A more satisfying game than using the DBM rules, especially for the winner who got the points for the ancient competition.
Franco-Prussian - Matthew and Kendall had a game using the 1870 Grand Tactical Rules for the Franco-Prussian War.

DBMM - a couple of games using the new experimental DBMM rules.
DBM - The Egyptians vs Persians. Darius cops an arrow and Persians run away.
Moderns - 1999 Americans fired lots of missiles at the Germans.
DBR - Germans vs Algerians. Germans not worried by missiles in this one.
WWII - Russians vs Germans; a game using the Blitzkrieg Commander rules.
See their site www.blitzkrieg-commander.com

Thanks to the Tauranga club for running an excellent convention and for giving us lots of medals and prizes. Andrew's Han Chinese army took him to second place in the 25mm Ancients competition, and Brett's Medieval Germans (pictured below) came in fourth. Kendall won the Best Baggage prize for his 15mm Samurai camp, and although he is too modest to tell you, he also won the Best Sport prize. Rob won third prize in Warhammer using Orcs and Goblins. In the DBR competition second place went to Philip, and Danny who played for only one day of the two-day tournament was still third!

Congratulations also to the City Guard club. They will be hosting Nicon next year here in Auckland.

Below are a couple of pictures from the Tauranga convention.

An all-mounted Empire army from WHFB 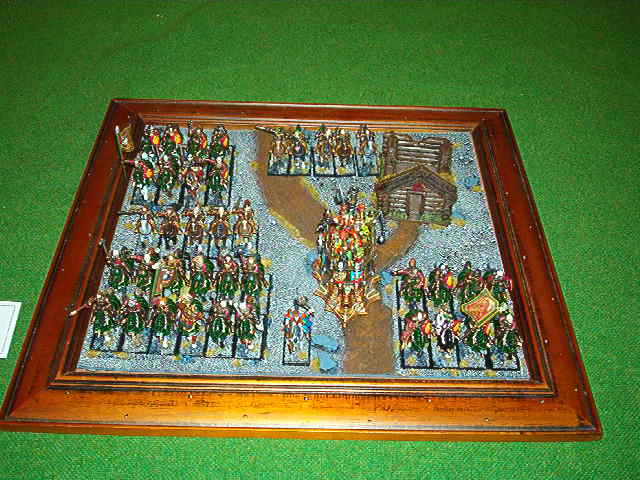 The Shore does Natcon

Natcon 2004 saw a great weekend, and a huge turnout from North Shore and associates.
Best result was Gerard with 2nd in Moderns, Brett Best Painted DBM, Paul 3rd in DBM 15mm, Glen 3rd in DBM 25mm, Nick 4th in WHFB, Kit 5th in Early War FOW, Rob 6th in Mid War FOW, John, Brett, Alastair, Phil and Stuart occupying mid tables in their DBM comps, and Kyle also turning out in WHFB. So we had 13 club members or very close affiliates down there, great turnout by the North Shore club.

Andrew has defeated Paul in a double or nothing play-off for the Ancient Trophy. The Han Chinese showing the force was with them......

A few more punters at this meeting (but not me as I have been on hols.)

Brett's Medieval Germans took on Andrews Chin Chinese in 25mm DBM, Brett winning that one.
Bruce (2000 US Armoured Cav) and Gerard (1998 Brits) played 1/300th Moderns (result not posted).
In 19th Century Principles of War Philip (Austrians) took on Kendall (Prussians) with the Prussian Cavalry capturing the Austrians supply line and rampaging behind the lines.
Meanwhile Lee and Steve had a couple of games of Flames Of War and Lee's Late War Soviet Armour won one and Steve's Late War Fallschirmjager won one.