We had our last meeting of the year, and the club will continue as usual next year with our next meeting scheduled for Sunday 10 January.

At the club today, Robbie and Lyndon played a Flames of War game. Lyndon was using Rob's army from the recent tourney. There was a 15mm FoG ancients game between Philip (using New Kingdom Egyptians) and two new club members Sam and Michael, using Alexandrian Macedonians. Brett and Kendall played FoG Napoleonics, with the Austrians getting a comprehensive win over the Prussians. 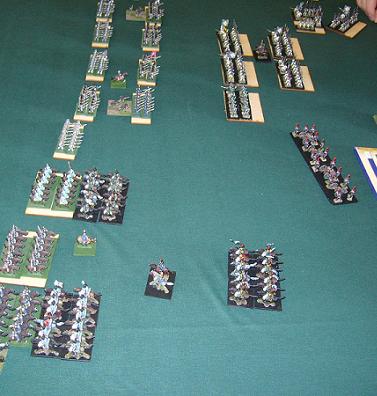 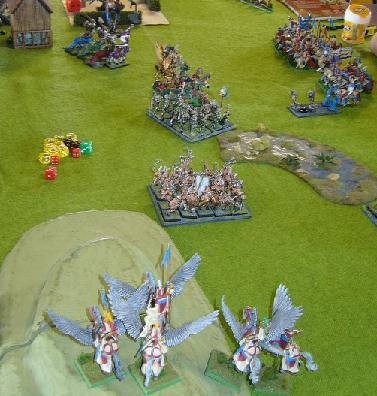 We had three games at the club today. One was a Warhammer game, and the other two were Napoleonics. John and Roland had a game using the new La Salle Napoleonics rules, and Brett and Philip had another playtest of FoG-N, with the Austrians easily defeating the Dutch-Belgians. 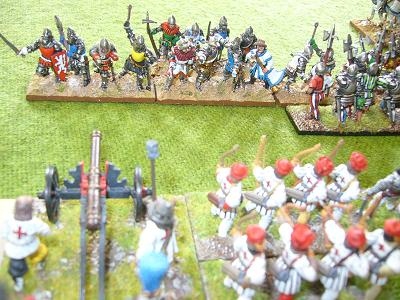 Lyndon and Kit had a Flames of War game using Russians and Germans.

Pictured above: Dismounted English knights from the Free company are about to overrun the artillery and archers of the Tudor English army.

The Auckland club is hosting 'BennyCon' (DBMM200 in 25mm) at the beginning of December, so we got in some practice games using the draft 1.1 rules. Benny (Carthaginians), Brett (Persians), Kendall (Hussites), and Philip (Tudor English) had three games - Hussites v English, Hussites v Carthaginians, Persians v English. It was a good trial of the 1.1 rules which worked pretty well with the smaller games.

Just the one game at the club today, as most of the club regulars were at the Battlefront tourney. Kendall and Philip played Napoleonics using the 3.1 beta version of the Field of Glory rules. It was a very hard fought game between the Prussians and French, resulting in a draw but with lots of action for both armies. The Prussians attacked one flank of the French army but couldn't take the two villages that the French were defending. On the other flank, the main part of the French army advanced rapidly, and then retreated rapidly when the Prussian cavalry counter attacked.

The Battlefront Late War GT was held at the Mt Eden War Memorial Hall on Dominion Road. It was an excellent tournament, 54 gamers, including two who flew over from the US to play (one of whom, embarrassingly, will be flying home as NZ champion!) Brett won the Best Army trophy and prize for his Finnish Sturmkomppania. Robbie came 2nd overall (British Guards Armoured Squadron), a great result, Kit, Lee and Ken were somewhere in the pack.

Brett and Philip had a game using the latest draft of the FoG-Napoleonic rules. Brett's Austrians defeated Philip's French Army of the Orient.

This weekend we held the DBR Push of Pike tournament. There were 8 players, and the winner was Richard Foster using Ottoman Turks. 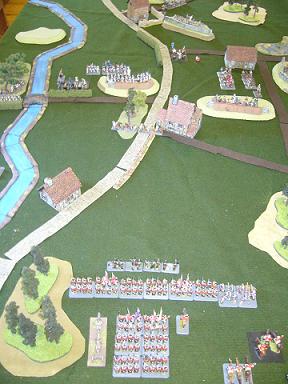 Rob and Dan had a WHFB game, with Rob's African Ogres beating Dan's ratty Skaven. A good practice game for the victorious Ogres with Fields of Blood coming up in a couple of weeks.

Kendall (Imperialists) beat Philip (Persians) 9-1 in DBR 15mm. Another good practice game for Push of Pike. Not a good run for the Persians with only 1 win out of 5 practice games so far!

In FoG-Napoleonics, Andrew got a convincing win with his Italian/French army against Brett's Austrians. The new command and control rules were tested, and the game came to a more decisive conclusion.

Grant, John, and Keith had an AWI game. It all looked spectacular in 28mm, pictured here.

Just the two games today. Firstly, Benny and Nick had a Flames of War free for all, between the Italians (with allied German Panzer IVs) and British western desert armies. Both had all armoured forces, without any infantry at all.

In the other game, Brett and Kendall played FoG-Napoleonics. It was a moderate victory for Brett's Austrians against Kendall's Prussians (based on the II Corps from the battle of Bautzen 1813). 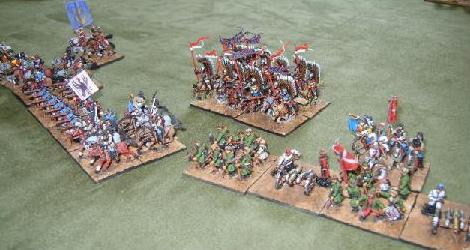 Two Flames of War games - Ken's Germans played against Rob's British armour in the morning, and then in the afternoon played against Kit's Russian guards. The second game was an epic struggle, ending with a polikarpov making repeated attempts and finally destroying a German battery to break their army, just as Biermeyer drove over a Russian objective.

There was another PoP training game, Grant's Poles getting a decisive 10-0 win over Philip's Persians. The misty weather continued throughout the entire game, causing some PIP problems.

We had two games at the club today. One was a FoG-Napoleonics game between Brett (French) and Kit (British). The British were ahead on points, with their Guards seeing off an Old Guard attack.

In a DBR game, practicing for Push of Pike, Philip's Persians won 9-1 against Benny's Venetian Colonial. 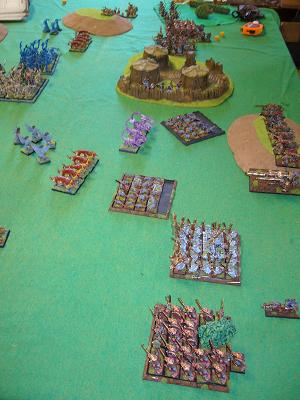 DBR 25mm - A 500 AP early period game between John (Spanish Imperial with English allies, pre 1534) and Philip (Tudor English with Maximilian allies, 1513). A 9-1 win to the Empire. Both allied contingents did just enough on their flanks to justify their employment, but not enough to endanger themselves. Meanwhile the Imperialist pike block destroyed the English billmen in the centre of the battlefield for almost no loss.

FoG-Napoleonics. Andrew (French) played Brett (Austrians). A long game on a table heavy with terrain, but the Austrians got the win. 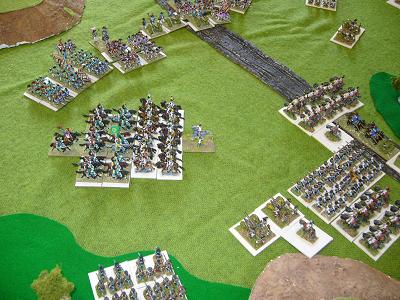 Kendall and Kit played a Rapid Fire game, Brits and Australians vs Germans and Italians. The scenario was based around the Allies defence of Tripoli, in which the Axis was repulsed in this game.

Brett and Philip had a FoG-Napoleonics game. Brett's Austrians got a marginal victory over Philip's French Army of the Orient. A closer examination of the rallying rules after the game revealed that it probably should have been a more convincing Austrian victory. As you can see from all the white card in the picture, our old Principles of War armies are being rebased on the new FoG standard bases (40x30mm) 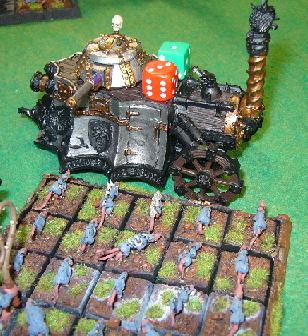 Three games at the club today.

WHFB - Dan's Skaven took on Rob's Empire army. It was a classic Rat v Steam tank encounter, as you can see pictured here!

DBMM 25mm - Andrew and Philip tried a game of 350AP on a 6 x 4 table. Andrew used the new draft Early Crusader list with Kn(O) and Bd(S), and Philip had Kushite Egyptians (without the Egyptian command this time). An unreliable Crusader ally-general kept the Crusader blades out of action until too late, and the Kushites got a 19-6 win. There were no major issues with deploying on a smaller table, but we did wonder how to fit the largest terrain pieces.

FoG-N - Brett (French) and Kendall (British) had a trial game of Field of Glory Napoleonics. The Old Guard did well!

Robbie took 2nd Place in the Tin Soldier tournament using Orge Kingdoms. This was a high qulaity field of about 26 including some chaps from Wellington.

Brett and Andrew had another FoGN game.

Nicon 2009 was held in the Napier Boys' High School hall, and there were more than 80 players. It was a really good venue, although rather cold early in the morning! Excellent standard of catering at the Heavens Bakery coffee cart as well.

Rob was in the FoW competition and took 4th place with his paras.

Our Renaissance webpage has photos of the DBR competition where Philip was 2nd and John 3rd.

Nicon 2010 will be held in Tauranga. The Hamilton club indicated that they were interested in bidding for Nicon 2011. 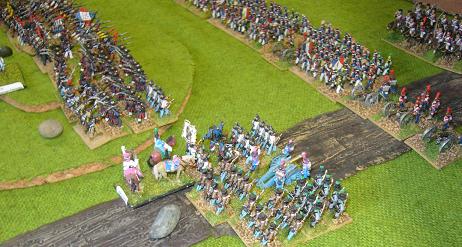 FoG Ancients Al (Spartans) and Benny (Early Carthaginians) had another game in the AWC club competition. The Carthaginians were gaining the upper hand as bad light stopped play.

FoG Napoleonics Brett and Andrew had a test game using the new draft of the Field of Glory Napoleonics rules. A scratch force of Neapolitans and Austrians took on the French, doing rather well.

DBR 15mm Mark (ECW Parliamentarians) played Philip (Muslim Indians). A 9-1 win to the Indians. A close range firefight between Pi(I) and Bw(I) turned out to be a bloody affair, with a lone bowman being the last man standing. The English musketeers repelled most of the Sipahis and Elephants in the centre, but both flanks broke. 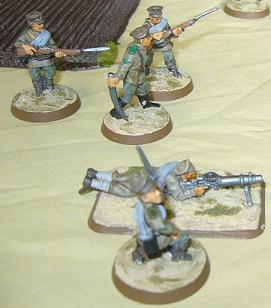 We had four games at the club today.

It was good to see more games happening at the club meeting today, with a couple of FoG games and some Flames of War, and DB-nothing. 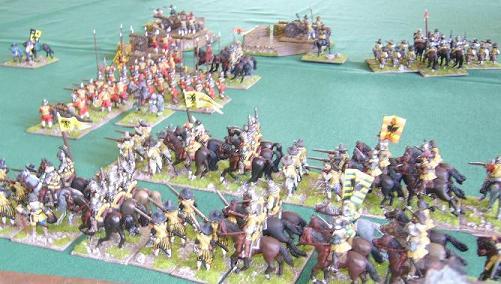 Next year's Natcon will be run by the Hutt club, and there were indications of future conventions in Christchurch in 2011 and Auckland in 2012.

This was our last meeting before Natcon, so a good chance to get in some practice games.

In DBMM 25mm, Andrew's Crusaders won a 16-9 victory over Brett's Persians. The inert Crusaders had two flank marches and a delayed command, pretty much SOP for Andrew really.

In DBR 25mm Philip's Tudor English beat Grant's French 10-0, but it was pretty close, only 1 element in it at the end. The game began in the fog, but as the armies moved towards each other unseen the fog quickly lifted and it was all action with a high casualty count on both sides.

A couple of games on at the club today. Firstly, Rob's British Paras were in a fighting withdrawal against Ken's Germans in Flames of War.

The other game was between Philip's Algerians and Mark, visiting from the Waikato, using Parliamentarians. The Parliamentarian Ironsides and Lobsters easily beat the opposing flank of Algerian sipahis and light horse, and their inferior horse on the other flank held off a large force of Janissaries. In the centre of the battlefield a great mass of warbands attacked a line of pike and shot. The warbands kept up the attack for many bounds, but couldn't quite get the breakthroughs they needed, and were eventually defeated.

Only one wargame on today, Graeme's Marian Romans taking on Philip's Mithridatics in DBMM 15mm. By the time we called it quits at the end of the day, one Mithridatic command was broken, and both sides had further commands close to breaking. The Pontic scythed chariots destroyed two enemy elements, and one friendly knight.

At the brief AGM we re-elected the same committee and set fees at $40 for the year.

BattleCry was held at a new venue this year, the ASB stadium in Kohimarama, and was a great success. There were lots of boardgames, card games, roleplaying (tabletop and live!) and Alf's Imperial Army made their customary appearance. There were a few trade stands, including Battleline Miniatures, who sponsored the prizes in the ancients competition.

Our club was well represented in the 25mm DBMM doubles competition, with three teams: Al and Benny (Hannibal's Carthaginians); Andrew and Philip (Kushite Egyptians); and Brett and Lawrence, whose Medieval Germans won the painting prize.

Kit ran the Flames of War competition, and Ken was competing in it.

Grant, Rob and Nick were in the Warhammer Fantasy Battle competition. Rob's African themed Ogres are pictured below right. 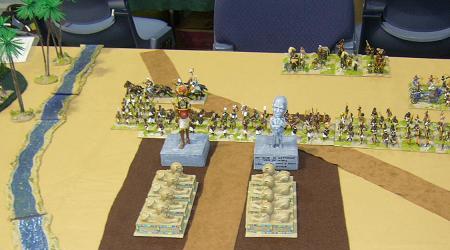 There were a couple of 15mm DBMM games at the club today. Al's Early Hoplite Greeks won 22-3 over Philip's New Kingdom Egyptians. Graeme's Marian Romans took on Kendall's Japanese. It was a hard fight between the Bd(S) and Pk(F). 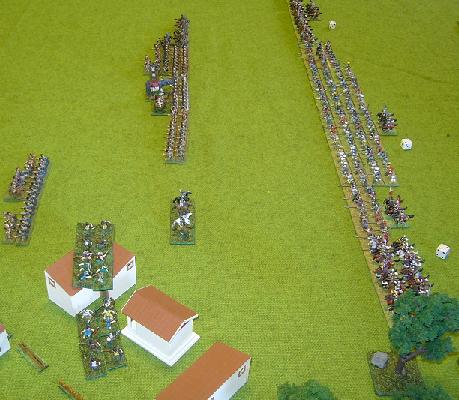 BattleCry is coming up in less than four weeks, so we had a couple of practice games.

Andrew and Philip played DBMM (Kushite Egyptians vs Early Crusaders). A 25-0 win to Andrew who was using the Egyptians.

We also had a couple of Flames of War games. Ken's Germans won a 4-3 victory over Rob's Paras in a crucible battle, and then Kit's Russian Guards scored 6-1 in a breakthrough battle with Ken's German Mech Pioneers.

Meanwhile Al is flying the (Spartan) flag at ValleyCon this weekend.

A rather a quiet beginning to the year. Rob and Nick played a game of Warhammer Fantasy Battle. Al and Philip set up to play 15mm DBMM, but the Pharaoh retired hurt and the game was abandoned.