Kings of War - Alan and Rob had a couple of games using Kingdoms of Men and Forces of Nature, followed by a quick Saga game in a Final Stand scenario.
FOGN - In a further playtest of the Quatre Bras scenario, Brett's Austrians successfully defended against Mike's French.
FOGN - Al (British and Spanish) defeated Philip (Army of the Orient) in a 1000 point game.

The NSWC hosted our first Snapshot tournament. It was a one-day event using late war armies. The three scenarios were Free For All, No Retreat and Dust Up. Kit won first place.

In addition to Snapshot, there were a few regular club games today. John and Grant had a 25mm DBR game, using Portuguese Colonial with Tupi allies agains Royalists. The Royalist infantry outshot their opponents, and even the Royalist merchant ships outshot the Portuguese warships.
Alan and Philip had two Kings of War games, both using Kingdoms of Men. One game was drawn and Alan won the other.

FOW - Lee had two games, first against Steve and then Rob.
Kit's US force got a 6-1 win against Steve's Germans in a fighting withdrawal scenario, playing on a boccage terrain that will be used at Snapshot next week. 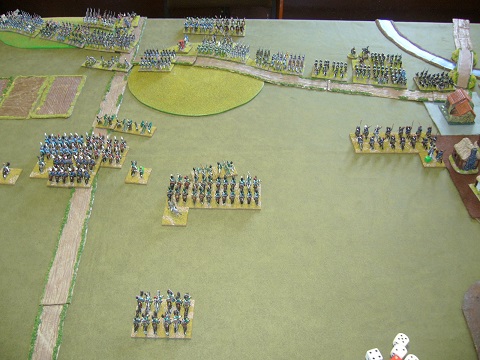 The mass of German conscripts await the advancing Russian cavalry and horse artillery. Not a Russian infantryman to be seen anywhere!. 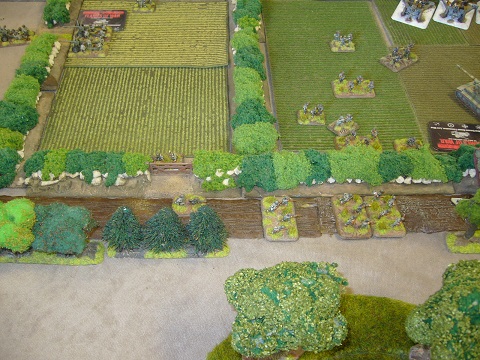 Germans and Americans clash in the bocage.

Alan, Philip and Rob played in the Kings of War tournament, all three using Kingdoms of Men armies. Rob took out first place in the tournament.

Rob played Alan in a couple of games of Kings of War winning one a piece, both using Kingdom of Men.
Brett played Mike in Napoleonics FOG.
Kit (British) played Brent (Prussian) who fielded his very first unit for his new army, some very nice Hussars. Kendall provided moral support and troops for Brent.

The Franklin Reivers club in Pukekohe hosted the second Heavymetalcon, this year with competitions for 25mm DBMM and WWII Bolt Action.

FOW - Steve's Soviets with lend-lease Shermans and captured Panthers got a 6-1 win over Brett's US army. 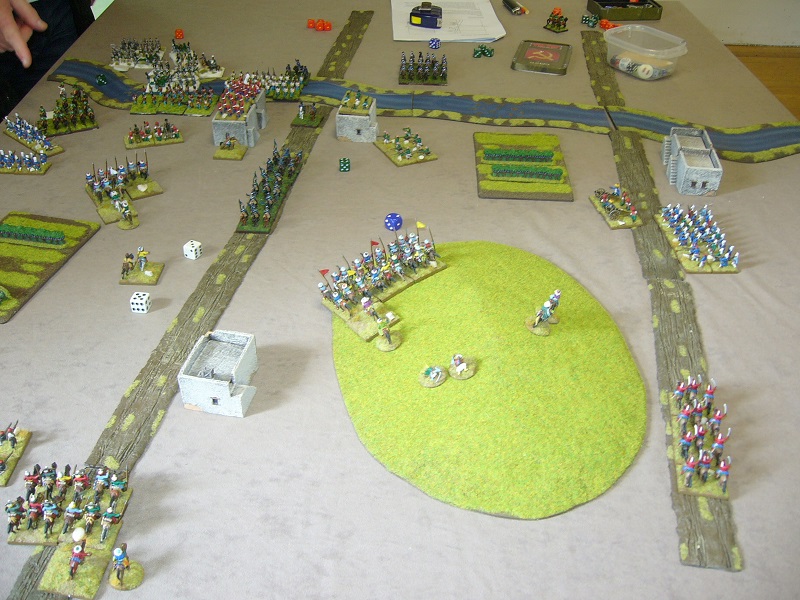 The Ottoman Turks defending the towns and riverbank in the Marengo scenario. 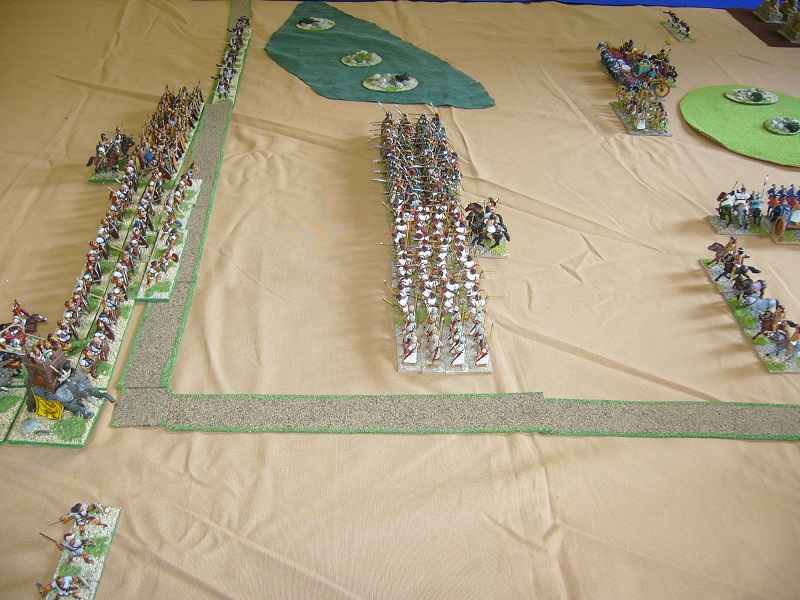 The same Greeks and Egyptians, recently seen masquerading as a Kings of War army, today were back to depicting themselves, but with no better result.

The second day of the PoP tournament coincided with a regular club day. There were a couple of 15mm FOGN battles. Kit (British) beat Andrew (Mixed nationality corps) in the Durnstein scenario, illustrated below. In the other game, Brett played Brent assisted by chief-of-staff Gneisnau (Blue), defeating him after a tenacious hanging-on for longer than expected defence by the Prussians. 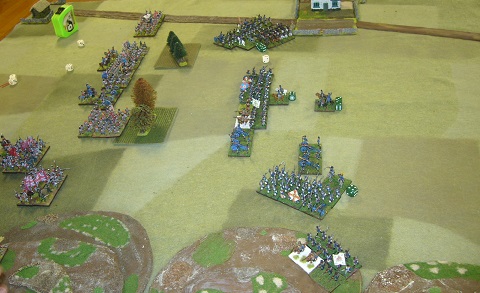 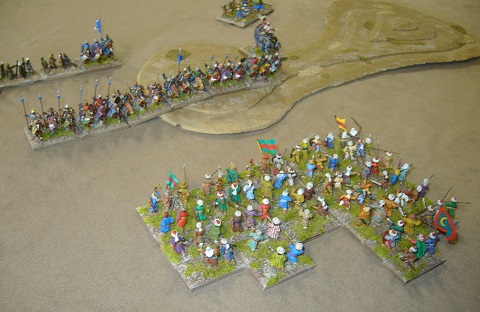 A quiet meeting with Guard Con being on the same day. There were two games, FoGN and a 28mm WWII game.

GuardCon 13-14 September 2014
The City Guard are running GuardCon at James Cook High School (the venue for next year's Natcon), with several NSWC players in the Flames of War and Saga competitions. 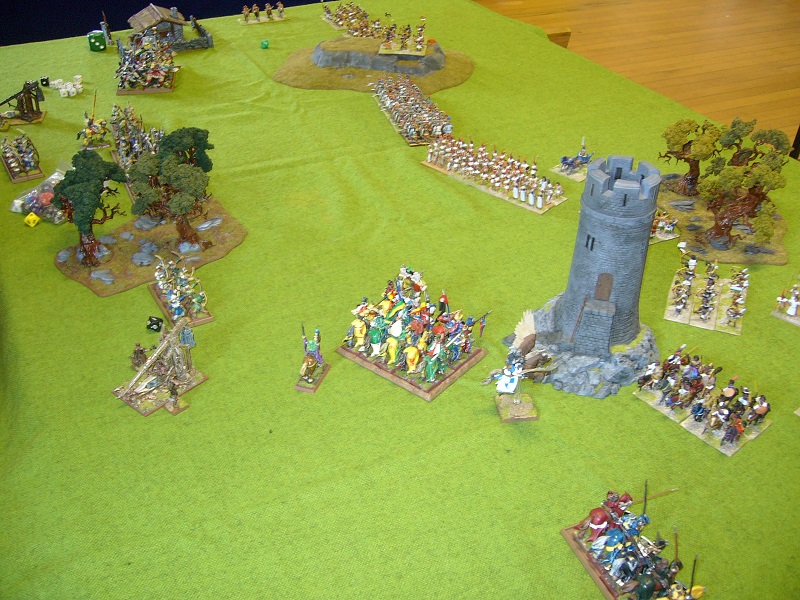 Kings of War. Alan and Philip had a fantasy battle using Warhammer Brettonians and DBMM Egyptians for Kingdoms of Men armies.

A couple of games each of 15mm DBR, FOG-N, and FOW.
In DBR, Rob and Kendall had a practice game for Push of Pike using Turkomen and Japanese, with the win going to Kendall.
John (Later Danes 1672) played Stu (Royal French 1640). The 10-0 win to the Danes belied the closeness of the action. With two fast moving, hard-charging armies in play, the game was over in 2.5 hours.

FoW. Mike had a couple of games using his Russian army first against Steve's Germans, and then Kit's US army.

Alan and Kendall played a game of Songs of Blades and Heroes.

FOG-N. Today we had two Napoleonics games using scenarios from the Melbourne tournament. Andy's Mixed Nation Corps defeated Philip's Netherlands Corps in the Friedland scenario with an all-out assault on one of the towns. In the Durnstein scenario, Mike's 1814 French beat Brett's 1800 Austrians.

Rob and Alan had a couple of fantasy games, firstly Kings of War using Goblins and Human armies, and then Songs of Blades and Heroes.

Flames of War. Steve had two games against Kit and Brett.

As well as attending the competition, we also went on a shopping expedition to Eureka and bought a whole lot of AB Miniatures, and also got some stuff from the Wargames Miniatures trade stand where they were selling JR Miniatures terrain.

John and Grant played a 500 pt 28mm DBR game with both using Samurai. 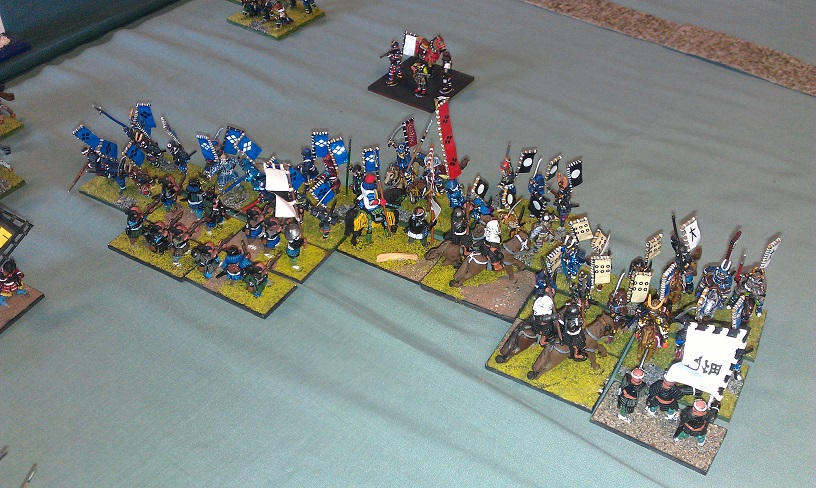 The Scout hall is looking good now, with a bit of a tidy up and new lighting. Thanks to the Scouts for all their work there!

WHFB - Dan and Rob had a Warhammer game, both using Orcs and Goblins.


FOG-N - Brett (Austrians) played Mike (Ottoman)
FOG-N - Kendall (Mixed Nation Corps) played Philip (Netherlands 1815), resulting in a mutual break.
FoW - Steve had two games with his Soviet army, first against Lyndon's Americans and then against Kit's Germans.
Bolt Action - Another WWII game with a marvellous table of terrain, including lots of buildings assembled by Scott, and which are available from Drive Through games. 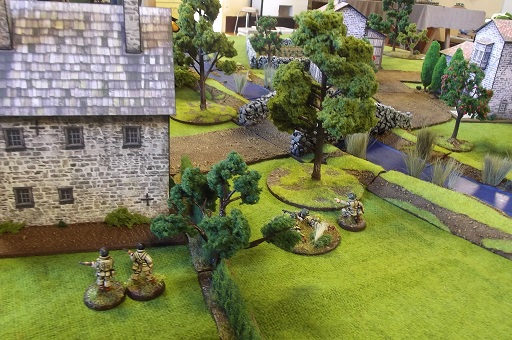 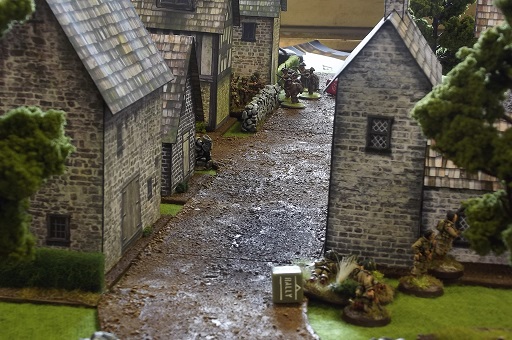 The North Island convention was held in Tauranga, and we entered the FoG Napoleonics competition.

Thanks to Blair and all the crew from Tauranga for a great convention. See you all in Thames for NICon 2015.

Rob did very well in the Flames of War late war competition, coming second with six 6-1 victories out of seven games.

Our club provided 6 out of the 8 players in the FOG Napoleonic competition. Brett won the best painted army prize for his 1800 Austrians. Mike was first with the Ottoman Turks, Kit second with 1815 Brits, and Keith 3rd with the 1812 Russians. 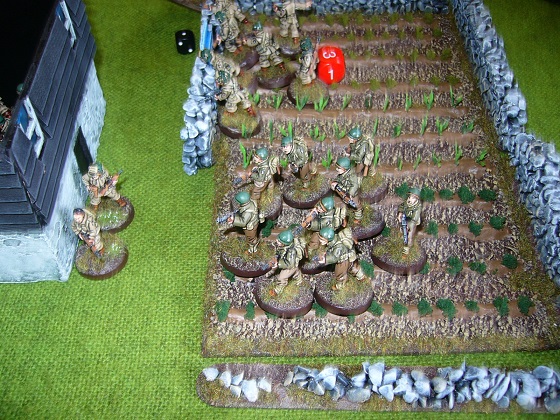 Just a couple of FOG-N games at the club today, as lots of people were away at Equinox.

Several of us went to Thames to put on a Napoleonic demonstration game. We had a 3000 point multiplayer game using 1815 armies. The allies (Andrew, Kendall, Kit and Philip) defeated the French (Brett, Mike, Rob, and Steve who came to join us from Tauranga).

In addition to the Napoleonics, Al took his Spartans to join in the 25mm DBMM games.

The event was held in the Thames War Memorial Civic Centre, a really good venue. Good potential for a future Nicon too!

Continuing the Napoleonic theme of the meeting, we had our first two games of the Sails of Glory naval game.

A good turnout from the club and some good results at BattleCry. Al ran the Moderns 1/300 competition, trialling the revised rules. Rob ran Flames of War this year. In FOG-N, 9 of the 12 players were from our club. Mike (1808 Turks) was second, Kit (1815 British) was third, and Philip got the best painted army prize for the 1814 German Confederation.

A couple of pictures from the Napoleonics competition 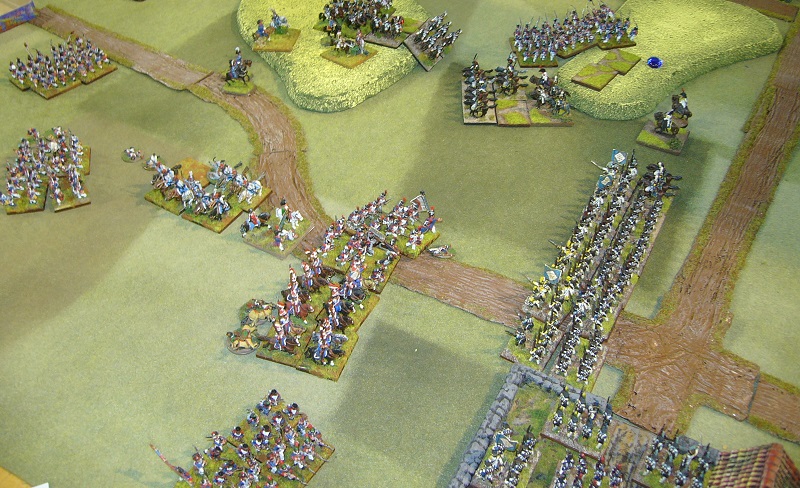 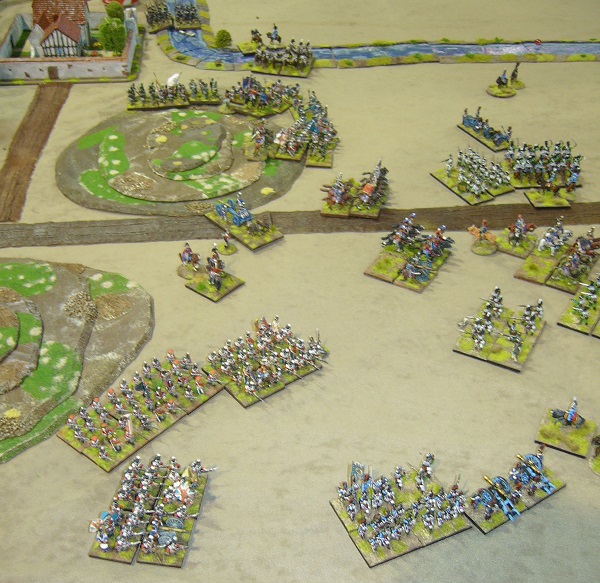 FoG-N - Brett (Tyroleans) got a winning draw against Kit (British).

Congratulations to Stu for taking 3rd place in DBR at CanCon, using the Royal French 1658 army.

DBMM 15mm - Steve (Late Romans) played Philip (Mithridatic) in a 500 point game. Both sides lost one command, and the game was a draw.

DBMM 15mm - Brett (Alexandrian Imperial) beat Kendall (Normans). An unreliable Norman command let the side down, and the game was a 23-2 win to the brilliant Alexander. 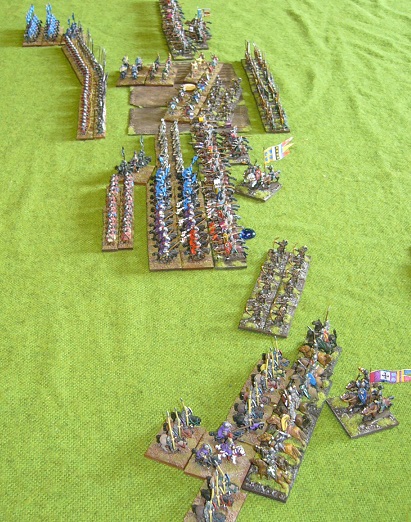 The club's AGM was well attended, and we re-elected the existing committee. The next major event on the club calendar is the Napoleonics challenge matches with the Auckland club just before Battlecry.